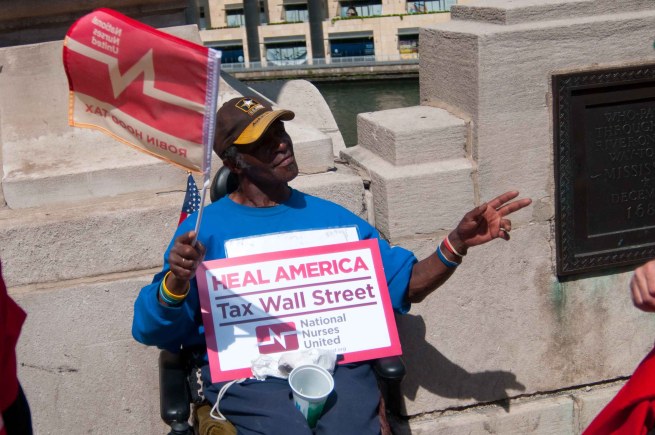 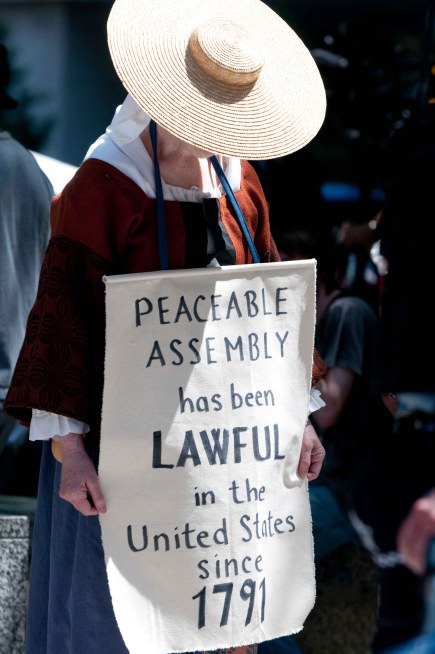 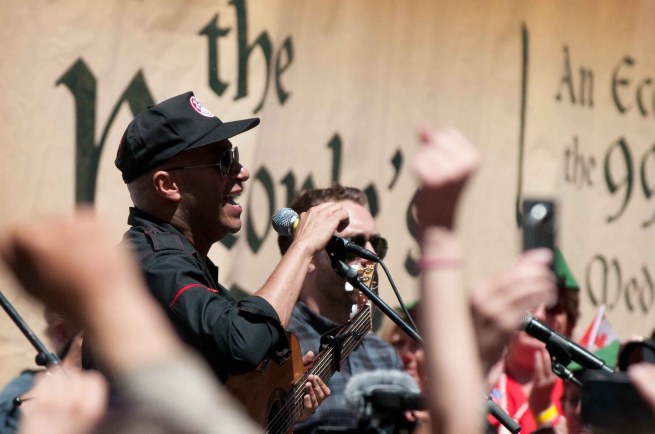 The mood that surrounded the Picasso sculpture was determined and hopeful around midday in Daley plaza on Friday. A sea of red t-shirted nurses crowded close to the stage to hear speakers, sing, and watch a skit parodying the G8 leaders. While on the periphery was everyone from Dr. Jill Stein, Green Parry Presidential candidate, and a suit wearing man in a skull mask to a woman dressed in revolutionary war costume with a sign declaring the right to peaceful demonstration. Mixed in were a few knots of Chicago police, and several news crews. Furthest away from the platform curious office workers and tourists paused or snapped photos on their mobile phones.

These men and women from around the world had filed out of the Sheraton Chicago Hotel and Tower just north of the river several hours before in a column fifteen feet wide and hundreds of feet long. In addition to the red shirts, many sported iconic/familiar green felt style caps complete with feather. They marched en masse down to Daley plaza, all the while being cheered on by observers, the odd encouraging horn honk and even a homeless man who had appropriated one of the group’s signs. They were advocating for a financial transaction, or Robin Hood tax on Wall Street speculation. Their goal for these funds is to wipe out some of the major health issues of American citizens, and people around the world. The event closed with Rage Against the Machine guitarist Tom Morello playing a brief but energetic set, accompanied by enthusiastic crowd involvement.

As the nurses dispersed there was a brief, pregnant pause before a younger, much louder protest group emerged from the crowd, most wearing black masks, took to the streets of the Loop shouting slogans and stopping traffic. Once they turned onto Michigan Avenue, the police presence picked up including a unit of mounted officers shadowing from a distance. As they moved north of the Pritzker Band shell, some of the leaders were having animated phone conversations with what turned out to be members of another equal sized group which could soon be seen 100 yards to the right being held back by a squad of police bike units. Once we came into sight, the other group pushed through the bicycle line or jumped over medians and the groups merged in a rush of hugs and high fives. Now doubled in size, they continued northwards to the river. At this point there were a few instances of pushing and shoving between police and demonstrators. Each of these was recorded by an instant swarm of video and still cameras, as the rest of the group surged on. When the group reached the river abutment one man scaled the side and tore down half of a NATO banner before being hauled down by police, but soon escaping their clutches with assistance from his colleagues. Once the entire group was on the bridge the police moved in, closed the bridge and split the crowd into smaller sections who were dispersed with minimal violence.