When 14-year old Ellie Rutan read “Out of the Depths”, the survival story of a Marine aboard the USS Indianapolis, it planted a seed. She became interested in connecting with these Americans who left home to serve their country during WWII. Through local VFW’s and veterans organizations, Ms Rutan began interviewing them and collecting their stories. “There is nothing like getting to actually talk with the World War II veterans in person,” she said during a CBS Chicago interview. To say that her interest was contagious would be an understatement. Her father began to get calls day and night from those wanting to share their history with her. Even her brothers began to take an interest, holding mock battles in the system of trenches they constructed in the family’s back yard. Eventually, she contacted the author of the story that had so inspired her. Through donations, and the assistance of those same veterans organizations, she put together a presentation at the College Church in Wheaton, IL to honor him and his fellow veterans. Several local VFW’s even pulled together a set of dress blues. These organizations, along with volunteers from North Suburban Young Marines, The Great Lakes Navy Band and the local community all participated in making this a special night for all of the scores of veterans in attendance who’s service spanned the decades. It was an impressive sight when Edgar Harrell stepped to the stage in his crisp uniform to share his experience. Mr. Harrell told about guarding parts of the first atomic bomb as they made their way to final assembly in the Philippines. Afterwards, en route to Leyte and with his duties finished, he decided to sleep under the stars atop the #1 turret. Just after midnight, he awoke to the sound of the first of three torpedo strikes. The ship went down quickly leaving 878 sailors and two Marines to suffer through 4.5 days in the shark infested water. He shared how his Christian faith sustained him through hunger, thirst, and watching friends succumb. On the third day, he swam away from the safety of the group towards some distant debris. It turned out to be a crate from the mess hall. Filled with foul tasting moldy potatoes. It was a lifesaver. Buoyed by the discovery, he described it as sort of like a picnic…except no ants. Ultimately, Mr. Harrell was one of only 317 to survive, and the only Marine.

Afterwards, the veterans in attendance mingled with their comrades and families. Many shared hugs and stories. One Marine, a Vietnam veteran, took a moment to share his original battle map of Iwo Jima to another who had served there. All the while, kids weaved through the crowd, looking up wide-eyed at the assembled heroes. 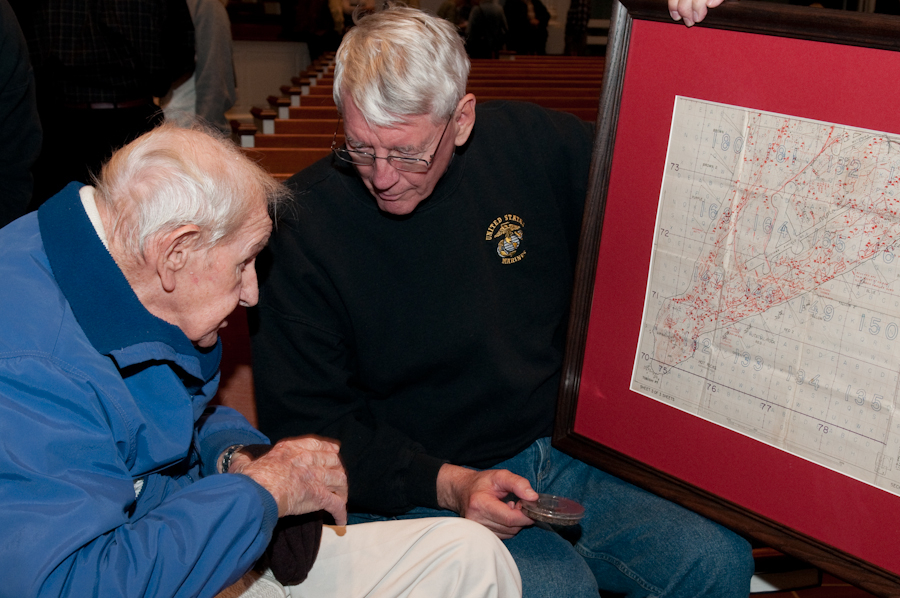 A Vietnam era Marine shares mementos from Iwo Jima with another, who fought on the island during WWII.

One Response to “Survivor Inspires the Next Generation”