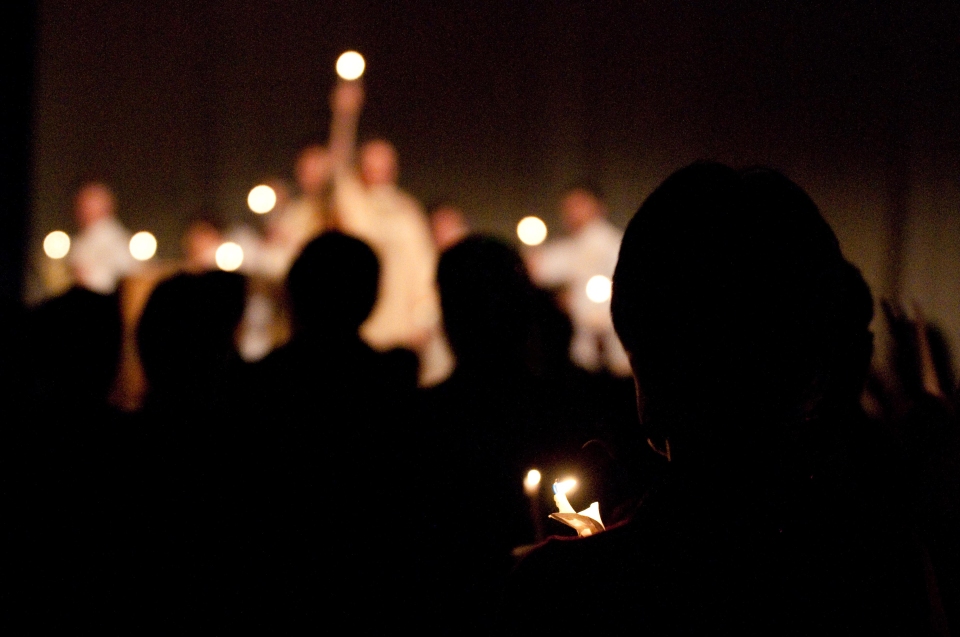 When I heard that Church of the Resurrection was relocating to what used to be a manufacturing facility, I wondered how a factory could work as my new church home.

Last month I volunteered to photograph the Christmas Eve candlelight service at Church of the Resurrection. Founded in West Chicago in 1954, the church eventually relocated to Glenbard West High School in Glen Ellyn where they held services for years. Last year they were able to purchase a building just west of downtown Wheaton that was formerly belonged to the Alcoa Corporation. Soon after, I learned that the building was a gem of modernist architecture designed by David Haid who was a student of renowned architect Ludwig Mies van der Rohe. Once the remodeling was finished, the first services were held on December 8, and I found out that it was indeed possible to transform an old factory into my church home.

I chatted with Trevor the Communication & Media Arts Manager as I loaded memory cards, adjusted lens hoods and watched people file into the sanctuary. The sun had long since gone down before the 7pm start, so I knew to be ready for an evening of high ISO, low light shooting. Typically while shooting events, I try to be as invisible and unobtrusive as possible so that I don’t detract from the moment. There was a constant mix of intensity and type of light as the main house lights rose and fell throughout the service. I wanted to capture the ministry team and the order of worship in addition to reactions from the congregation that genuinely told the story against the background of the modernist interior. I was excited about incorporating the new cast bronze baptismal font, but it was a challenge to get the sort of surface reflection shots that I was hoping for.

Towards the end of the service, a flame was shared one by one to candles held by each member of the congregation. Somewhere in my mind I registered how beautiful it looked as I hustled to get good coverage of the scene. A father shares a moment with his daughter. The look of wonder on a boys face. A prayerful moment. Wide shot of the overall scene. Most of the shots during this part were ISO 1600, and aperture f4. It would’ve been nice to open up further for a more manageable shutter speed, but I didn’t want to lose the depth of field.

Events are one of the few opportunities outside of my personal creative work where I feel like the 10.5mm fisheye lens is appropriate. I used it for a few shots during the middle of the service to show the overall feel of the new building and again at the end to capture the candles.